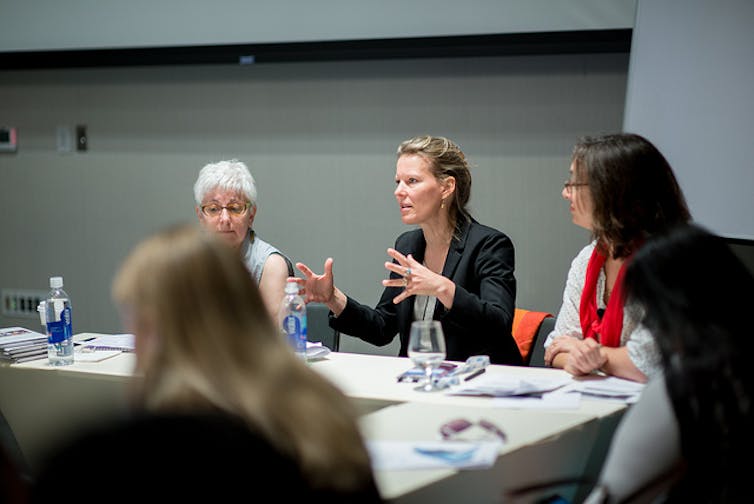 Workplaces can be a key setting to prevent violence against women but prevention programs are often thwarted by some leaders who don’t see it as a workplace issue, our research shows.

Our report focused on 15 workplaces and organisations from the corporate, community sports and recreation, local councils and education settings as well as male-dominated industries, and sought to find out how they are addressing gender inequality.

International research shows that greater inequalities between men and women increase the risk of violence against women.
Workplaces can contribute both directly and indirectly to improving gender equity in our community and to building cultures based on respect. It is partly through workplace recruiting, hiring, and pay practices, that Australia still has a gender pay gap of 17.9%.

Sexual harassment, despite being unlawful, is also still a major issue for workplaces. The Australian Human Rights Commission reports that around one in three Australian women experience sexual harassment in their lifetime. Yet, only one in five women will make a formal report, and for those who do, one-third of women have reported being relocated, demoted, ostracised or labelled as a ‘troublemaker’.

Domestic violence affects workplaces too. The Australian Government estimates the economic costs to the business and corporate sector totalling to about $1.5 billion a year. The direct costs to employers in terms of staff absenteeism, lost productivity, replacement staff costs and misused workplace resources is estimated at $465 million.

There are some workplace programs that are playing a direct role in reducing the risk of violence against women for their employees but these aren’t widespread. The biggest barriers to the take-up of these programs are informal cultures of sexism and discrimination in organisations. Some leaders who don’t see why violence against women is a workplace issue. Another problem is allocating the staff time and resources needed to implement prevention activities.

Workplace initiatives need to go beyond ‘messaging’ and statements endorsing equity and respect, it requires action. This means individual staff and managers are trained to recognise the signs an employee might be experiencing violence, respond appropriately and either refer employees to appropriate support services.

Examples such as the CEO Challenge Australia and the White Ribbon Workplace Accreditation Program are working with employers to raise awareness through staff training, as well as practical policy changes like domestic violence leave. By implementing training and policies to respond to violence, some Australian workplaces have already seen impacts for staff experiencing domestic violence.

But if organisations really want to make a difference, programs need to move beyond responding to violence and provide sustained programs that address gender equality and are tailored to the specific workplace conditions.

Commitment from senior management is a crucial factor in program success. Programs such as the Gender Equality Project developed by the Centre for Ethical Leadership work intensively with executive level staff to raise awareness of unconscious gender bias and identify and transform structural barriers that prevent women from achieving leadership positions in an organisation.

Organisational ‘champions’ are also pivotal in driving change, and male leaders can play a key role here as we are seeing with the Male Champions of Change campaign.

However programs that are successful don’t just focus on the leaders but take a ‘whole-of-organisation’ approach. An example is Act@Work developed by Women’s Health Grampians which uses multiple strategies to drive change at different levels (executive management, middle management and entry level staff) and for different outcomes (formal policy and practices, staff knowledge and attitudes and informal cultures and behaviours). Other features of this program include involving staff in identifying areas for change and designing specific activities to address these.

Another key feature of successful programs is that they are tailored to the workplace itself. Violence prevention programs need to be able to adapt not only to the diversity of workplaces (e.g. government, nongovernmental, industry and corporate contexts and small, medium and big business), but also the diverse nature of workplaces (e.g. manual, office or professional environments and range of employees within a workplace, multiple work sites or locations).

For example, to ensure prevention activities are implemented consistently and sustained over time, organisations such as Darebin City Council and Maribyrnong City Council in Melbourne have appointed a dedicated position to oversee the work.

The prevention of violence against women can also complement other corporate values and strategic plans that promote equity and respect across race, sexuality and ability. Success can be measured by conducting a gender audit of pay and equity measures, as well as surveying staff to monitor changes in the culture of workplaces and to plan prevention activities.

Promoting gender equity and respect is a key action we can take to prevent violence against women. Workplaces have a lot to offer and the benefits will extend beyond individual organisations and into our community more widely.